John’s passion for Paul Reed Smith Guitars goes back to the very beginning of the PRS story. Paul and John have been working closely together since 1978, when they first met at Paul's one-man West Street workshop in Annapolis, MD. At that time, Paul was designing and building his first guitar for Carlos Santana. They soon began collaborating on many things related to Paul's quest for building the ultimate guitar.

Paul knew what was wrong with various aspects of the then current guitar designs and had a vision of how to improve them, but local machine shops were not able to supply him with hardware to his specifications. Being an avid guitar player himself, and an engineer / machinist by trade, John was able to help Paul close the gap and they ultimately designed the patented PRS Vibrato bridge system that is now on many PRS Guitars. Paul bartered with John for some of the early design and manufacturing work with one of the very first PRS Santana models that he built by hand himself!


About the John Mann's Guitar Vault...

The Guitar Vault has the largest selection of PRS Guitars under one roof in New England.

As a PRS Signature Dealer, we carry a wide selection of over 100 guitars including Private Stocks, Wood Library, Limited Editions to the Core production Maryland made models, as well as the new Bolt-On, S2 and SE models.PRS Amplifiers are always in stock.Largest selection of PRS Parts and Accessories.

The Guitar Vault also is the exclusive distributor of our sister company MannMade USA
MannMade USA Guitar Bridges and Parts are the world's finest products available for your PRS, Fender or Gibson guitar (many others too) !
Made right here in Bedford, New Hampshire, USA. 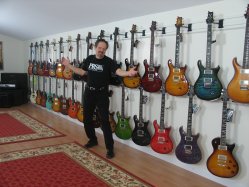